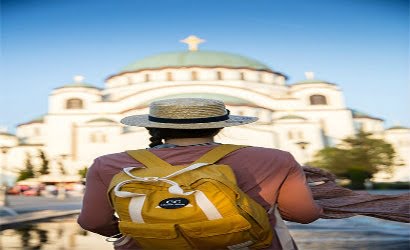 After your guide picks you up we go to Pionir park which is surrounded by some very important buildings and from there you will have a nice overview of Serbian history and the history of Belgrade. On this spot, you will hear interesting stories about two Serbian royal dynasties and some of their endowments like the Old and New palace which are today the City Assembly of Belgrade, and the President's office. Both of them are built-in late 19th century and with National Assembly represent an important part of political life in Serbia.

After the Palaces, we move to one of the most important streets in Belgrade which carries the name of Prince Milos Obrenovic. The street holds important buildings, such as embassies and ministries.

The tour continues to Dedinje, Belgrade’s most prestigious residential areas where Serbian kings had their palaces. Belgrade has four Palaces, two of them are situated in Dedinje, the Royal Palace, and the White palace. Along the ride, we'll enjoy the beautiful architecture and amazing villas built in this posh part of the city.

This is the biggest Orthodox temple in the Balkans and one of the biggest in the world and is for sure something you shouldn’t miss while you are in Belgrade. Its monumental size will leave you speechless as well as interior decoration. Here you will learn more about the first Serbian archbishop, his influence, and why he became the most important saint in the Serbian Orthodox church.

From St. Sava temple we drive to Republic Square. Here we can find three important monuments: the National Theatre, National Museum, and Monument of Prince Mihailo Obrenovic. Today this is the city center and a famous meeting point. From here we'll continue on foot exploring the hearth of the city center-main pedestrian street, Prince Mihailo Street. Many stories and legends are related to this area as well with beautiful architecture.

The end of the walk is in the area of King Peter’s street known for the oldest coffee place in Belgrade- Cafe “?” and Church of the Holy Archangel Michael, also known as Orthodox Cathedral. Here we'll finish exploring Belgrade and we can have local traditional drink rakija or just a coffee with some friendly talk.

What is the policy on face masks and attendee health during Belgrade Private City Tour?
Explore the highlights of Belgrade on a private 4-hour city tour including St Sava Church, Serbia’s largest Orthodox church
Book Here
From €41.03
/ Adult
Need help with booking? Send Us A Message

Dorcol Neighborhood, Old Belgrade, Savamala 1 Day 2-15 People
Join in this  street art tour where you’ll discover some of the best examples of the amazing Belgrade Street art scene, some unique graffiti, and...
View Details
Available through out the year:

Zemun Belgrade 1-15 People
In this 3-hour long Zemun Neighborhood tour accompanied by professional guide, you will get to know the most charming quarter of Belgrade, Zemun, characteristic for...
View Details
Available through out the year:

Kalemegdan Park, New Belgrade, Old Belgrade 1 2-15 People
Sightseeing to Old and New Belgrade is ideal for people with limited time and first-time visitors. Visit both the historic city center and newer districts...
View Details
Available through out the year:
We use cookies on our website to give you the most relevant experience by remembering your preferences and repeat visits. By clicking “Accept”, you consent to the use of ALL the cookies.
Cookie settingsACCEPT
Manage consent