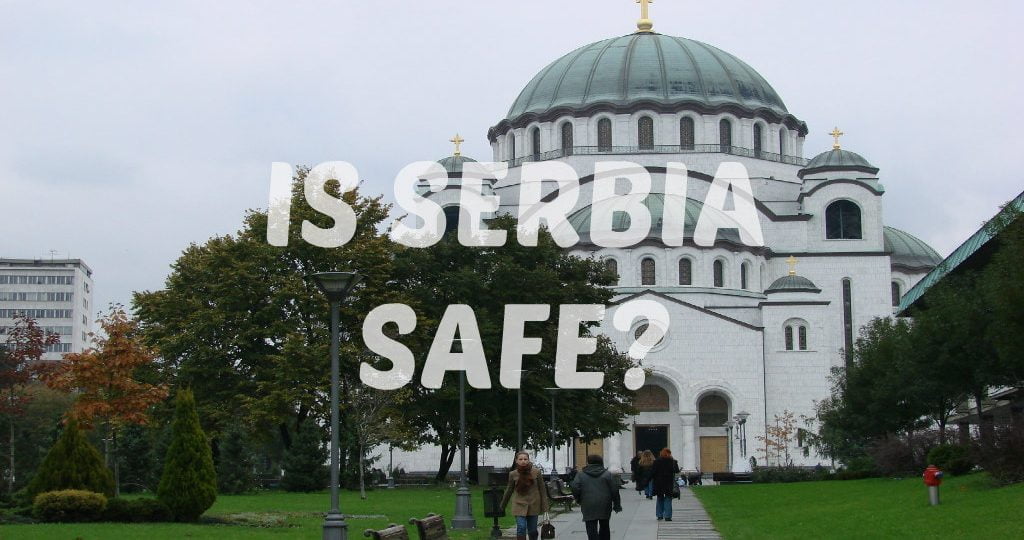 Is Serbia safe to travel to? I have heard this question so often, and my answer is that Serbia and Belgrade are some of the safest destinations.

And since its people are friendly – this country is considered to be very much safe.

For a country that's slowly rising from years of war and internal security issues, Serbia is relatively safe when it comes to crime. Like elsewhere, travelers should take common-sense precautions.

Its challenging nightlife and amicable people are so welcoming that more tourists come to Serbia every year, especially during the summer months.

How safe is Serbia for travel?

How to get a credible answer to the question – Is Serbia safe to travel to? The best way is to read what other visitors have to say about Serbia and Belgrade.

One of these is Stephanie and Allison, two American travel bloggers, who have visited Nis, Novi Pazar, Kragujevac, Novi Sad, Subotica, Belgrade, Zemun, Gamzigrad, and Zajecar, so their Serbia travel advice is well-tested.

After months in Serbia, they give us proof that Serbia is no war zone. Indeed, is Serbia safe to travel to, whether you are a solo female traveler, traveling in a group of friends, or traveling as a couple? See all the important facts about Belgrade!

Generally speaking, the overall risk in Serbia and Belgrade is rather low. Serbia is generally very safe. It is ranked 31st of 162 on the list of the safest and most dangerous countries.

Transportation in Serbia is, in general, safe. Taxi scam is rather rare, but you should be very careful when picking the taxi's color before hopping in.

Don't miss reading this article taken from worldnomads.com – How I (Almost) Fell for the Belgrade Taxi Scam.

This risk has declined significantly in recent years and today is considered low risk.

Pickpocketing and bag stealing is the most common form of street crime in Belgrade, so if you encounter any problems, it will probably be pickpocketing that mostly happens in public transportation.

The possibility that someone will kidnap you in Serbia is very low.

Crimes like these do happen but have declined in the last decade significantly and are not likely to happen to a tourist.

Let me tell you right away that terrorist attacks are more likely to happen in most popular European capitals such as Paris, London, Berlin, but not in Belgrade.

Serbia is very safe for women travelers. Attacks rarely happen, if ever, but still, pay attention at all times.

This article was written by Karen ‘Solo female travel in Serbia: Is Serbia safe for women‘ is very interesting. I do advise you to read it before you go.

While homosexual acts are not illegal in Serbia, it is not widely accepted. Discrimination based on sexual orientation is illegal, but unfortunately, there is still a negative attitude towards LGBTQ+ communities. Same-sex marriage is also not legal.

Get a travel insurance quote for Serbia.